We caught up with Roland, a YELP Class of ’18 Fellow, upon his return from the over 5,000 kilometer, Cape-to-Cairo, Great African Caravan. He shares his experience and the lessons learned so far. 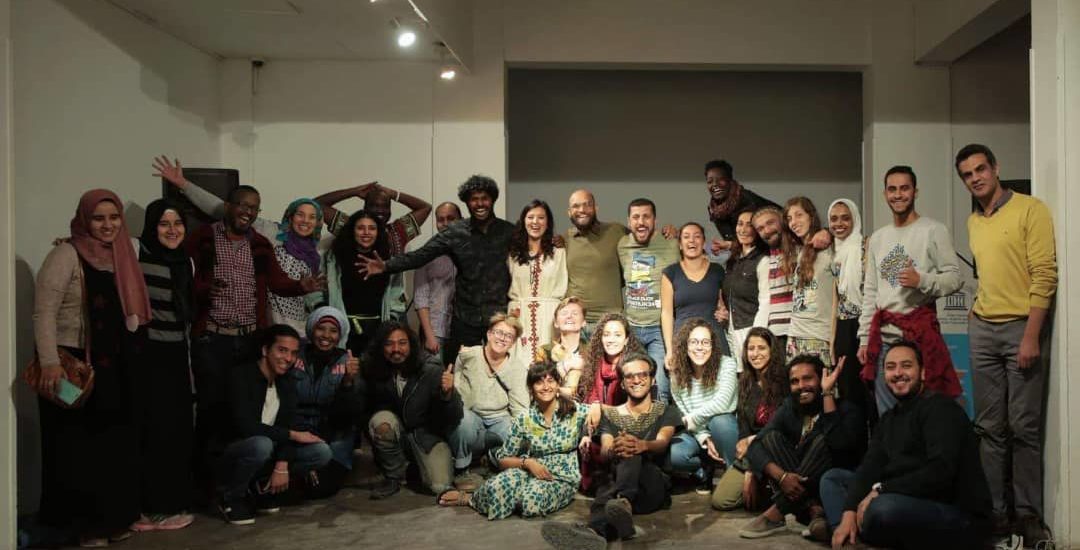 The Great African Caravan is the first cross-continental initiative of the Art Caravan, an Indo-Swiss based association led by Akram Feroze. The Caravan’s main objective is to generate a borderless movement around the world in a “Global World Without Borders” campaign. For Akram, art is a great holistic and inclusive tool to eliminate borders and unite the world through dialogue on culture, community building, democracy, human rights, peace and a truly borderless world.

The Great African Caravan journey started in August 2018 in South Africa through Zimbabwe, Zambia, Tanzania, Rwanda, Uganda, Kenya, Ethiopia, Sudan and ended in Egypt in March 2019. The caravan took 250 days, 50 more than the team had earlier planned for.

The entire trip from the Cape to Cairo was the first that the team of 12 (6 males and 6 females) travelers and artists from Asia, Africa, Europe and South America were experiencing together. For the team, the journey created a bond for each other and although a few (three) dropped off along the way for different reasons, the momentum within the team to complete the nearly 5,000 kilometer remained unabashed.

The caravan received support from various organizations such as Mahindra Adventures, Africa Unite, Makukhanye Art Room, Bench Events, Flytta and UNICEF among others.

Roland Byagaba, a Ugandan writer and Fellow of the Young and Emerging Leaders Project Fellowship class of 2018, was part of the 35-week journey and recently spoke to us about his experience participating in the Great African Caravan.

What inspired you to join the team?

This was an opportunity I got to know of through Facebook and I was inspired by the project’s philosophy of humanity beyond borders, my love for travel and cultural exchange, and how I could personally contribute to the state of Intra- African travel through writing about my experience during the journey.

I reached out to Akram [Feroze, Artistic Director at the Great African Caravan] to be included in the caravan before it began but the team was full at the time. When they reached Uganda, Ife Pianki, a friend who was participating, and from whom I had gotten to know about the project, pulled out to be with her children. Akram then asked if I was still interested in joining, to which I said yes, dropped whatever I was doing and joined them.

What informed your discussions with locals during the caravan?

Throughout the journey, we collaborated with several local artists in the different countries we passed through to spark conversations on the UN Sustainable Development Goals (SDGs) in artistic, tangible and accessible ways. The local partners would determine what topics to be addressed depending on their community’s pressing needs. The team would then break up into their different disciplines to discuss the topic and put everything in context. They would then spend a week coming up with artistic productions around the topic which were then presented to a local audience after.

Some of the activities done were painting, songs, theater plays, short movies/documentaries, photo shoots, dances and writing. Simultaneously, the team would be processing visas to get to the next country and fundraising too so that the caravan could continue.

How receptive were the different communities towards the caravan and its message?

We always had local partners who assisted with introductions to the local artist communities and logistics on the ground. The team’s diversity eased the artistic interpretation by the locals. The locals understandably expected a monetary return as is the nature with projects like ours and the nice Mahindra cars we were driving when they first came out to meet us. It was very inspiring to see the majority of them staying to collaborate with us even after realizing that we wouldn’t be able to facilitate their participation because we were operating on a very tight budget ourselves.

Generally, my expectations were broken and fears crushed in the different countries. Some of the tribal areas like Ethiopia were quite hard to penetrate because of how self-contained their arts sector has previously been. For instance, a Wole Soyinka play was to be performed in Addis Ababa and the director told us that was the first play written from outside the country to be performed there in a very long time.

Finding Ethiopian literature that wasn’t in Amharic, the National language, also proved to be tricky. Even our collaborative performance at their National Theater was a rarity, but we hope we inspired them to consume more art from outside their borders.

During our stay in Egypt, for instance, some people seemed to be walking on egg shells, cautious of political topics of discussion, due to the prevailing political environment there. They didn’t want to end up in prison like some of their friends and colleagues.

In Sudan, we ended up not doing any major collaborations because the arts scene is heavily repressed by the government and the protests over Bashir’s regime were ongoing so the environment was not conducive.

This journey opened our emphatic chambers, stereotypes were shuttered and pre-conceived opinions were unlearned. The lack of luxury enabled the team to get vulnerable and become more real with the communities as we mainly depended on their help. They welcomed us with sheer goodwill (Ubuntu) and utmost interest, as showcased by their engagement.

It was a good moment for us all to unlearn, learn and relearn so much about Africa.

I also observed that people tap into one’s vulnerabilities to open up to theirs. Equally, on the team, our internal challenges bound us together. We had to watch out for each other because we were all we had. We had to have personality tolerance because of our different cultural backgrounds. It was crucial that each member of the team is open-minded and ready for whatever life brought along. There was a lot to learn from one another in all walks of life.

What challenges/hindrances did you face along the journey?

Some of the hardships along the journey included fundraising for support, as well as having to apply for visas each time we approached a given country. Countries like South Africa denied some of the team members (Uganda and Kosovo) visas which resulted in them missing out on the activities there. Our visa and border issues went a long way to show how ridiculous borders, and the policies on which operate, can be and how they deter us from discovering our world and connecting as humans.

Other challenges included stereotypes around colorism as most communities perceived a “Mzungu” to be the one worthy of such travel, dubbing them too luxurious for the Africans that were part of the caravan.

This was so to the extent that I was often perceived to be the local that was guiding and chauffeuring the team around as a tour guide. It was good to have such notions thrown out of the window and to have conversations with fellow Africans on why more of us need to abandon this way of thinking and visiting each other’s countries more often.

The majority of our challenges were due to how slim our budget was. Logistical preparations were also inappropriate which inevitably affected the programing of the journey. On most nights we were hosted by members of the host countries. Goodwill went further to fuel the entire journey than money could possibly have.

A few more issues included climate, transportation (our cars broke down a few times) and getting caught up in insurgences in some areas.

Personally, I have an online social startup [muwado.com] where Africans get to tell their stories and I hope to now carry it across the continent. There is need for trade to be synched in the border-lessness of states in Africa.

On the journey, I noted that the taxation and visa procedures were a big hindrance to a normal African who seeks to do business across their borders. For that matter, I believe that so much can be gained from cross border business transactions, with the African Continental Free Trade Area soon becoming a reality.

Our next plan is to host a festival in India preferably before this year ends. I am also writing a book about the entire journey which will be accompanied by the different publications from our entire team including film and web series.

The next caravan will be in South America, in 2020. We hope to bring on more people to share in the same experience. I hope to inspire more young people through sharing the African experience that we can no longer rely on outsiders solely to tell our story.