2018 Writivism Festival: What does LEGACY mean to you?

The sixth Annual Writivism Literary Festival is taking place from 17 – 19th of August 2018 with the theme, Legacy. Over three days, starting at the National Theatre on Friday and The Square Place on Saturday and Sunday, we will think how the past is remembered, negotiated and adapted to inform the present and future through among others, book launches, panel discussions, keynote addresses, poetry and music performances, visual arts and photography exhibitions, poetry and so on. 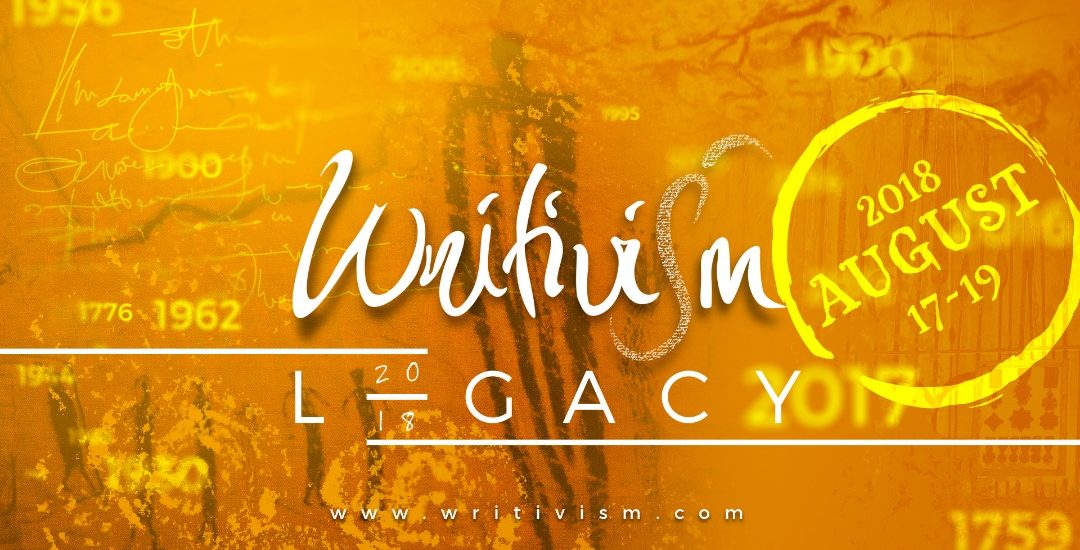 The sixth Annual Writivism Literary Festival is taking place from 17 – 19th of August 2018 with the theme, Legacy. Over three days, starting at the National Theatre on Friday and The Square Place on Saturday and Sunday, we will think how the past is remembered, negotiated and adapted to inform the present and future through among others, book launches, panel discussions, keynote addresses, poetry and music performances, visual arts and photography exhibitions, poetry and so on.

As part of the lead up activities to the festival, we are asking members of the public to reflect on the festival theme, legacy. The excavation of history enables us to see the legacies we have inherited, and to consider what legacies we leave for the future. With more African writers publishing historical fiction, what are some of the interesting ways you have seen history explored in the arts? What legacies from the past have you examined to shape your own philosophical world view? As a continent with a very troubled past & present, what legacy are the current generations building for those that will come after us? Are they honoring the pan-African calls of those that were part of the struggle to get our ‘independence’? And on a personal level, what will your personal legacy be?

I happen to be curating this festival and during the process of putting together the festival and choosing the topics for discussion, it’s impossible not to mull over these questions at great length as you envision the kind of conversations you want people to have while attending the various events. I have also been carrying the title of Writivism Director for close to a year now. If there is a group of people that have to constantly think of legacy, their own and that of the institutions they lead, it is leaders. Seeing as this is my first go at leadership of something I didn’t own and, hence, with real stakes beyond me, I have spent quite a bit of time reflecting on my personal legacy.

At a very early stage in my working life, I was exposed to the complexities of working within a team. Personality clashes, uneven investment in the cause, motivations, miscommunications, chemistry…all these are factors that are constantly at play to make the leaders life miserable. From then, I think I have consciously avoided leadership and its associated responsibilities. I am very selfish about my peace of mind. All my startups have been intentionally lean to limit the number of people I was working with. But my career trajectory seemed to suggest that I could only hide for so long. Anyone with any real ambition will inevitably find themselves in a position of leadership.

As my 30’s loomed a few months away, the opportunity to lead Writivism was presented and I figured I might just as well. I was coming out of a taxing SAP consultancy gig with a strengthened resolve to focus on my creative endeavors. A place at the top of one the continents respected arts initiatives, therefore, seemed like a great starting point to figure out the industry. The sensible thing to do now that I had decided to do this leadership thing was to find some resources that would provide me with some insights on how to be an efficient leader. So I applied to be part of LeO Africa Institute’s 2018 YELP class and was fortunate enough to be accepted.

In the first seminar, one of the texts we were given as reading material is “Reflections on Late President Kwame Nkrumah’s Pan-Africanism Legacy“, a speech delivered by Ali A Mufuruki at the TANA High Level Forum on Security in Africa on 18th April, 2015 about the not-so-rosy side of Nkrumah that many seem not to have heard about thanks to the polished predominant narrative we’ve been presented over the years. Now, most people interested in the idea of pan-Africanism will tell you Nkrumah is considered the originator and biggest advocate for it at the time African countries were gaining independence.  It was interesting seeing some of the fellows react to the legacy of one of their biggest African heroes being ripped apart with surgical precision. Personally, this wasn’t the first time I was being exposed to the shortcomings of Nkurumah. ‘Harmattan Rain’ a novel by Ghana’s Harruna Ayesha Attah (who we had the pleasure of hosting at the 2017 Writivism Festival) that’s among the contemporary historical fiction books, introduced me Nkrumah’s shortcomings and how he displayed ‘African Leader Tendencies’ the longer he stayed in power. On a related side note, I hope to see more fiction novels in this genre because I find them a more engaging way to revisit the African history lessons I barely paid attention to in school till it was time to cram for exams. Such is the power of storytelling.

My key take away from that discussion and others I’ve been part of as I have tried to learn more about leadership and figure out my own leadership style is how we deal with our humanity and its various flaws in order to become leaders/people worth remembering in a positive light. As a leader, it’s expected that you have things figured out most of the time. For someone that has been winging most of their professional adult life, this is a very scary position to be in. People are looking up to you for guidance and winging it just won’t cut it. Short and long term plans have to be made and followed. Those communication issues you’ve managed to get away with till now just won’t fly anymore because people are waiting on you to make critical decisions they can act on. Your disregard for financial prudence has to be corrected because it’s not just your salary and side hustle income to do with as you wish anymore, but the budget of an entire organization and funders to provide accountability to. That bias you have against reporting, figure it out because there are plenty of those to be written. The stubbornness that makes it hard for you to ask for help, kindly overcome it because the work is too much for you to take on all by yourself. Basically, how do you overcome several bad habits and character flaws so as to avoid your legacy being running the organization and all those associated with it into the ground? No pressure J

I will be lying if I claim I have since managed to get a grip on things. The truth is far from that. This journey has made me realize certain things about myself which have resulted in me battling my biggest case of self-doubt and imposter syndrome ever. The crippling type! I might have even had my first bout of depression. But, thanks to assistance from friends, mentors, members of the team and the fantastic network of people that have become the Writivism family over the years, the initiative is still running without any major disasters despite my shortcomings, and the learning continues.

And now, we have a nice festival coming up in a week so please come and attend so we can celebrate African literature, the wider arts and look more into our collective and personal Legacies.